The general pick rate obtained was: 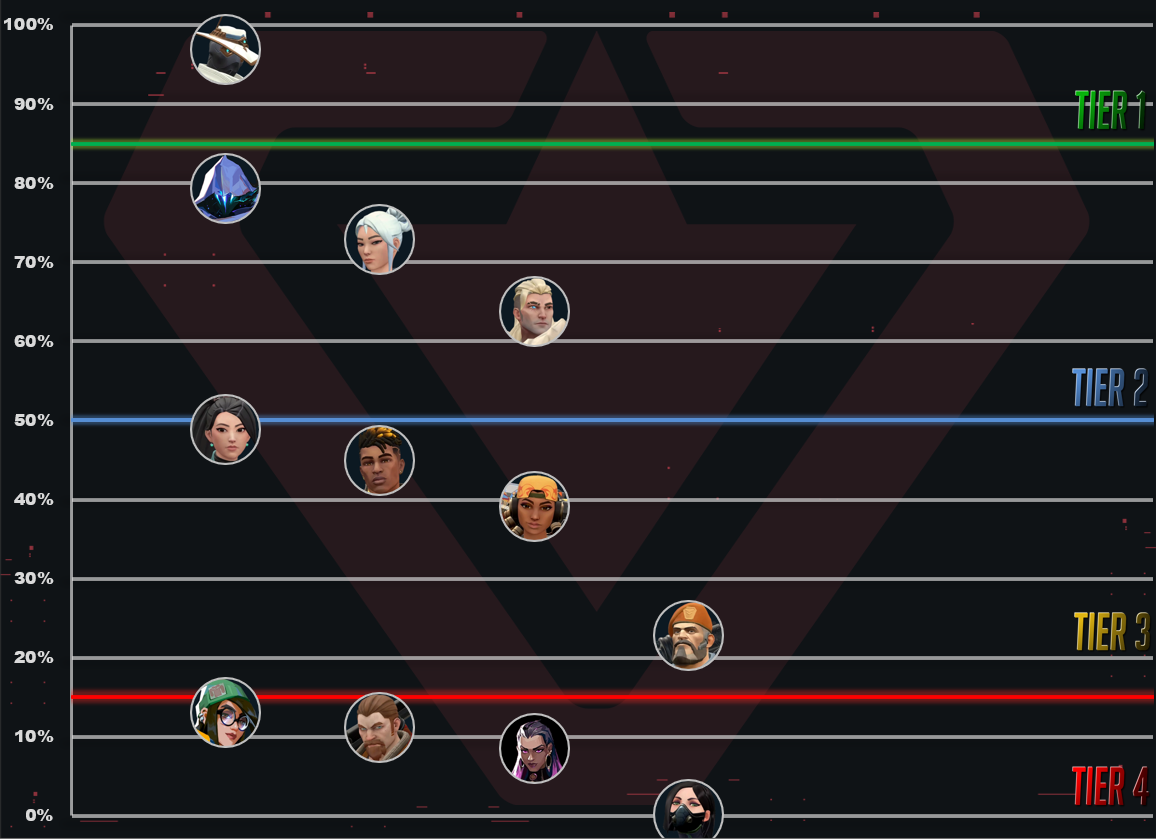 The essential agents, present in virtually all compositions.

Cypher (97%) kept first place, being the only agent that obtained Tier 1 and proving to be a key tool in all teams.

Powerful agents, they provide useful tools and are difficult to
replace, usually the flex slots.

Omen (79%) is the favorite smoker, chosen in almost every map. Jett (73%) is even more popular in North America than in Europe, this partly has to do with the style of play that North America is adopting. Sova (64%) dropped a bit, but stayed comfortably in Tier 2.

Good agents, with potential in the competitive game, viable depending
on the map or players who prefer them.

Sage (49%) continues to drop while Phoenix (45%) remains a recurring choice in North America. Raze (39%) didn’t maintain the same popularity she had in Europe, but is a frequent Duelist in compositions. Finally, we have Brimstone (23%) who lost a lot of space to Omen as the team’s smoker.

Agents that need some adjustment to enter the meta or are viable in
very specific situations.

Killjoy (13%) makes her debut with a good pick rate, especially considering that her pick rate comes from only one of the tournaments. Breach (11%) and Reyna (8%) are specific choices for some players. Finally Viper (0%) doesn’t find her place and the teams opt for other alternatives, we will have to wait to see if the last buff she received will help her get out of Tier 4.

Analyzing the pick rate by map:

Omen and Brimstone continue to have a complementary relationship, when Omen’s pick rate decreases, Brimstone’s increases, the clearest case of this is Bind.
Sova in the open maps is a solid option, but on Split his pick rate decreases drastically. The teams are playing faster and faster, this allows the use of different compositions. This ends up impacting in Sova’s pick rate on Haven, one of the fastest maps.
Sage remains strong on Split, the map where Sova is left out and opens the possibilities to Sage, who allows good map control.
Killjoy, Breach and Reyna were particular choices of teams and players, with Breach notably absent on Bind.
In North America more and more compositions are being played with double duelists, aggressively trying to counteract the presence of the agents that provide map control (Cypher, Sage, Killjoy).

Sentinels exhibited a fast play style taking advantage of Phoenix’s abilities to gain space quickly. Phoenix even went through a Slow Orb and a Sage wall in the duration of his ultimate.

With the new statistics page I will move the focus of the reports.
I put in two tables with the general win rate results per map and below you can find the particular performance of each composition on that map.

You can filter by team (clicking on the team columns) getting in the table below the compositions used and their round win rate. If you are interested in the performance per map, clicking on the row to the corresponding map in the table below, will show the compositions, and win rates.. The size of the squares in the upper table indicates the number of times a composition was used by a certain team and the color indicates win rate.

Now the question is: What information can we get from this?

About the champions, Sentinels, we know that they used only 3 compositions between the two tournaments:

They keep Sage, an agent that many teams are neglecting, on all maps except Haven. A curious thing about Sentinels is that despite maintaining the same core of agents, they change who uses those agents: 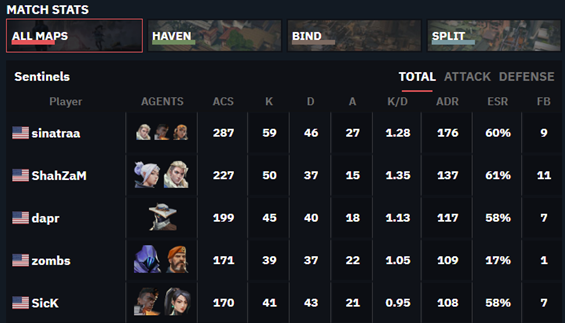 Jay “sinatraa” Won used Raze, Sova, and Phoenix, but he swapped these agents with two players: SicK for Phoenix and ShahZaM for Sova. This tells us that the flexibility per team map is quite strong and that although their compositions do not vary so much, the players piloting the agents may vary, changing how the team plays.

Envy had more changes in the last two tournaments:

Killjoy is still a new agent and implementing her as a solid tool will require time for the teams. In spite of this, in their last tournament they used Killjoy in all the maps except Split, the composition with the worst win rate is the one they use on Bind, where they change the Phoenix for Raze.

Cloud9 is looking for a style of its own from the hand of Reyna:

They suffered several changes in their compositions, even within the same tournament we saw how sometimes TenZ chose to go for Reyna all the maps of a match, in others they left Reyna aside. Cloud9 is looking for their playstyle around a character that is not very popular, it is an interesting proposal and tries to get the most out of one of the best players in the region. It is similar, in some ways, to what Team Liquid does in Europe to empower Adil “ScreaM” Benrlitom with Reyna, giving him the freedom to choose the fights and how to take them after the first frag.

Dignitas made it clear that they are a team to be reckoned:

The compositions with Brimstone were used mainly in the Knights Invitational Gauntlet, for Pop Flash they changed to Omen instead in all maps except Bind. I feel that this is a team that still has a very large variance in performance between matches, but that it shows the potential they have as a team.

Finally we have the usage from report to report:

Ctrl + Click on any of the lines to select a particular agent to follow its pick rate.
The relationship between Brimstone and Omen, which we have been mentioning for some time, can be clearly seen: 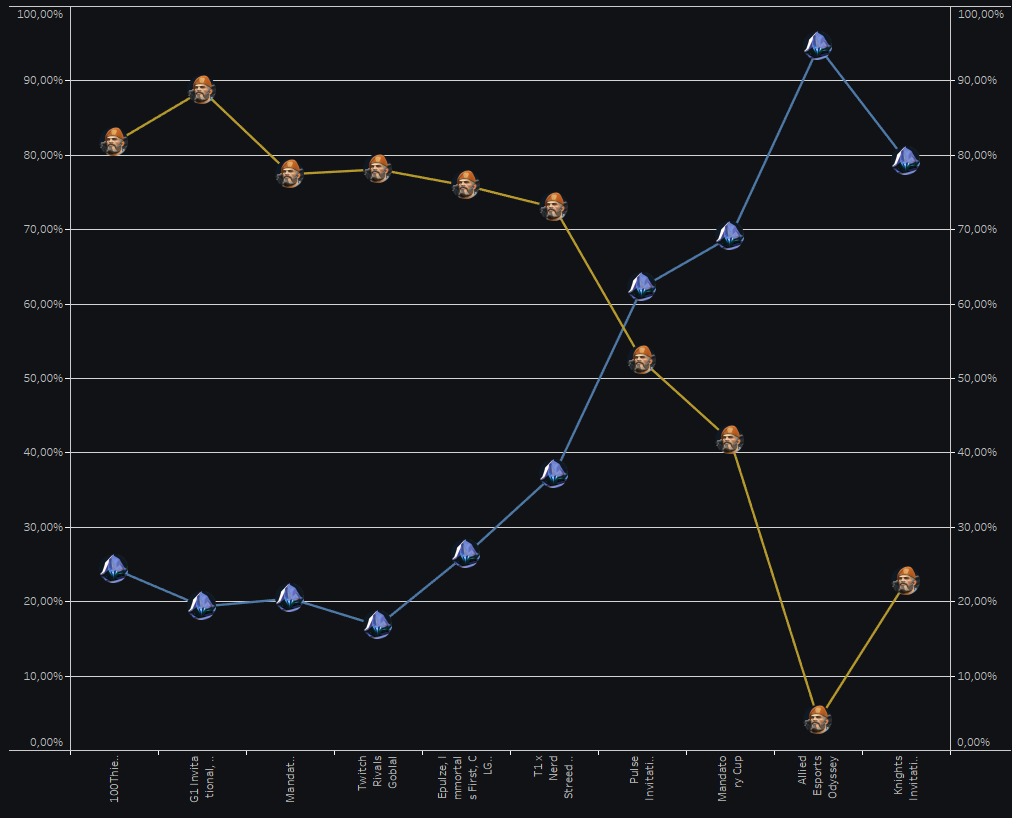 The relationship is practically inverse, when one goes up the other goes down in the same measure.

Another interesting relationship is that between the Duelists and Sage: 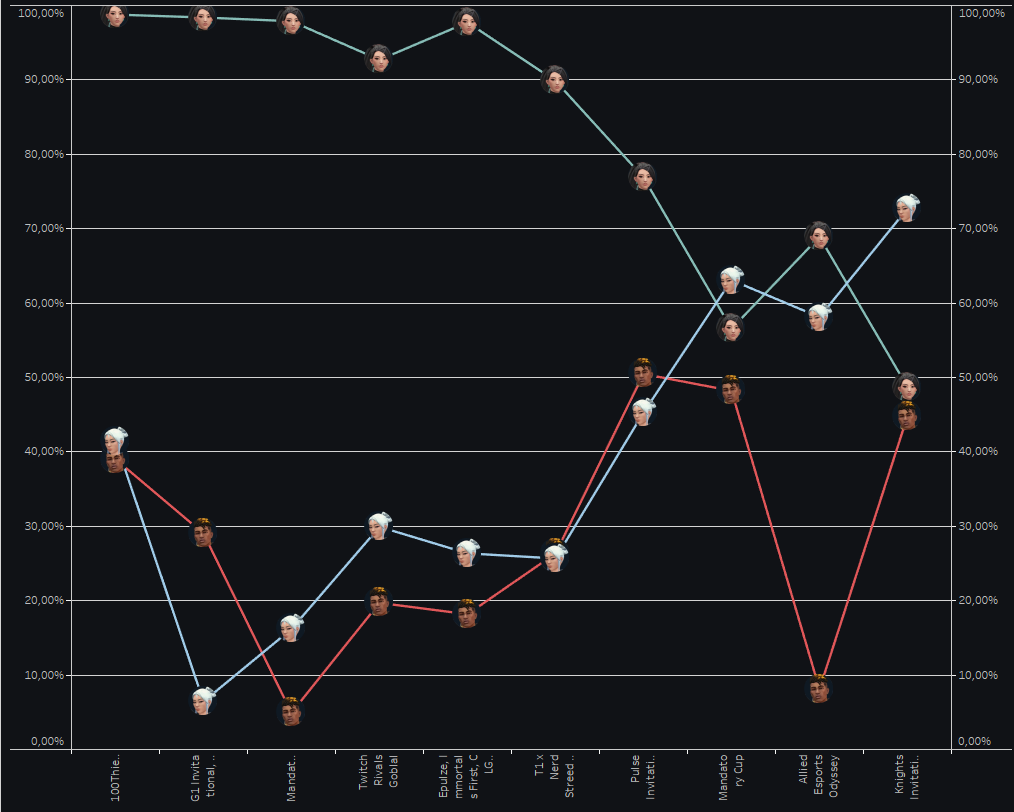 Sage was extremely strong while the Duelists (Jett and Phoenix) were relatively out of the meta, by the time they began to grow and the play style became more explosive, Sage lost strength.

I’m trying to figure out how to approach the upcoming reports, much of the information I was providing can now be quickly filtered through each event. I want to add value to the information. This report is a change in the new direction. I would like to know what you think about it, if you prefer this style or the style I used before.