Casual fans often seek to compare VALORANT’s competitive scene to that of Counter-Strike: Global Offensive, placing North American and European teams among the best in the world. However, Asian teams are seeing massive success in VALORANT as well, and none more so than Vision Strikers Vision Strikers

Team:Vision StrikersMaps Played:69KPR:0.87ADR:149.25 comes in. The team’s’ Jett has put up big numbers to help his team to the success they’ve gotten. Rb sat down with THESPIKE.GG to discuss Vision Strikers’ First Strike performance, how their meticulously crafted set plays come about, and where he thinks they fit on the international stage.

The following interview was conducted in Korean and translated to English. Answers have been edited for clarity and grammar. 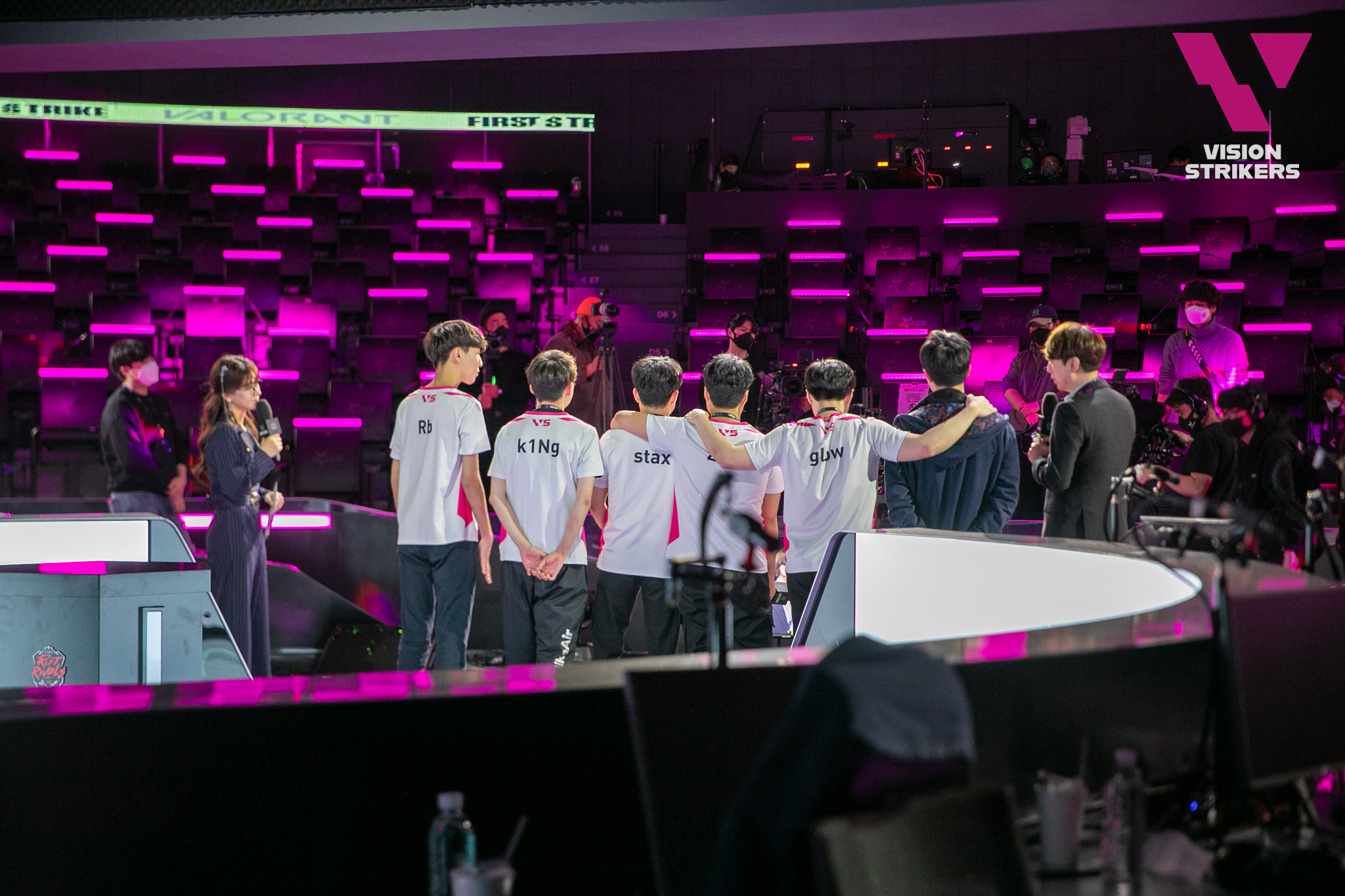 There wasn’t much bad to say about Vision Strikers’ performance at First Strike. They rolled over the competition, losing only a single map. However, that map was somewhat significant as it was Vision Strikers’ first outing on the new map, Icebox, losing 13-6 to Cloud9 Korea Cloud9 Korea

. As Rb details it, things went much better for them in practices before the event than they did on matchday, and they’re looking into reworking their strategies.

“We practiced Icebox in our own way, but during the semifinals, unlike our practices, we made some significant mistakes that led to the round loss. Currently, we are exploring new strategies for the map.”

Lee  “GODLIKE“ Seo-haYu  “TS“ Tae-seokKim  “Efina“ Nak-YeonYeom “eKo“ Wang-ryongPark “exy“ Geun-cheol in the finals. That time around, things went much better for the team, as they took the victory 13-7. Rb says they was prepared for the pick and used feedback from their previous loss to turn things around.

“The map pick was expected so it wasn’t surprising. After our loss on Icebox during the semifinals, our team was able to gain rather quick feedback, which I think helped us to win.”

. Given that they used to be so close to each other, they practiced together all the time. Rb says they were so prepared for each other that the finals were a very different experience to play.

“TNL Esports is our sister team from the past so the finals was just a fun and overall pleasant experience for me. Also, I’m not sure if anyone was aware, but everyone knew each other so well in-game that it was like playing rock-paper-scissors throughout our entire match.”

Rb, and most of the rest of Vision Strikers, come from a CS:GO team named MVP PK. They were one of the very best teams in Korea – but in the Counter-Strike world, being the best team in Korea doesn’t mean much. As Rb describes it, the team decided to make the swap to VALORANT mainly because their international prospects would be better.

“First and foremost, there was a lot of expectation and hype knowing that this FPS game was created by Riot Games. Knowing that Riot would be the commissioning chair for this esports scene, we thought that VALORANT’s future was incomparably brighter than CS:GO. Looking back, based on the implemented ecosystem, it’s basically impossible for an Asian team to compete against European and North American teams. The overall size of the league, the practice environments, the level of talent pool, etc, they all lack in comparison to the European and North American counterparts. Even now, I don’t think Asian teams will be able to compete at a meaningful level on the international stage. We were all taking these into consideration when Riot Games announced that they will be launching VALORANT. Unlike CS:GO, VALORANT was going to be launched simultaneously across all regions, and we recognized that every region would be starting at the same point. Taking everything in as well as looking at our lineup, we believed that we would be able to do well in the VALORANT scene.”

Rb has played Jett almost exclusively since getting into the competitive scene, and noted that he began picking her up simply because his team thought it would be good and it fit the way he wanted to play.

“I played a lot of Jett in ranked games before she became prominent in team matches. I think she fits my playstyle very well. Also, we tested various agent combinations during our scrims, and eventually came to the conclusion that Jett is a highly viable agent in the current meta, as she can take on multiple roles.”

When dissecting Vision Strikers, many western analysts often note one thing: their set plays. They’re known as “the best team in the world” for this, pulling off creative moves that completely cut off their opponents and leave them with nothing to do but die.

Rb describes how this idea began in the team’s minds, that there were no other strategies that top teams from other regions were using that they thought would fit their playstyle, so they came up with a style of their own. He also detailed how these plays come about, beginning with the coaches and working down to the players.

“Usually, the head coach and coach come up with the strategies during their meetings, but collaborate with us (the players) for details before we implement them in our practices. We watch a lot of teams’ respective leagues and their matches, but it doesn’t seem like any other team plays like us in terms of style, or has strategies that compliments our own strengths. So instead of reworking other teams’ strategy and making it our own, we’ve taken the approach of focusing on creating new strategies from scratch. Based on our success thus far, it seems like many teams are copying our strategies now.”

As for how they get them to work so perfectly? “Countless hours of research” and “understanding the play at the most meticulous level.”

Given that Vision Strikers are so dominant at the Asian level, it may present a challenge for the team to not rest on their laurels. But given that they have so many challengers, Rb says it isn’t too much of a problem for the team to keep on top of their game. He also offers up that the team doesn’t actually think they’re as dominant as outside analysis often suggests.

“While it’s true that we are doing well thus far, I don’t believe that we are as dominant as people may perceive us to be. Knowing that countless teams are targeting us for our rank 1 title in Asia, as well as recognizing the fact that we may eventually lose our championship status, we are diligently practicing in our own way to ensure that no team is caught up to our level.”

If there’s any team that could catch up to VS, Rb says it will likely come in the form of their First Strike finals opponent and old sister team.

“If we are ever ousted from the rank 1 title in Asia, I believe the team that’s able to dethrone us is TNL Esports.”

The next step for Vision Strikers seems to be to take on international competition. Rb thinks that the main difference between regions is their emphasis on team play, and that Asian teams are better than some people think.

“I think that a lot of fans are actually waiting for us to play international events. If an international tournament starts right now, I believe that a couple of Asian teams will be able to compete for the top positions. Personally, I think European and North American teams rely on each player’s individual talent, while Asian teams focus more on strategies and team play.” 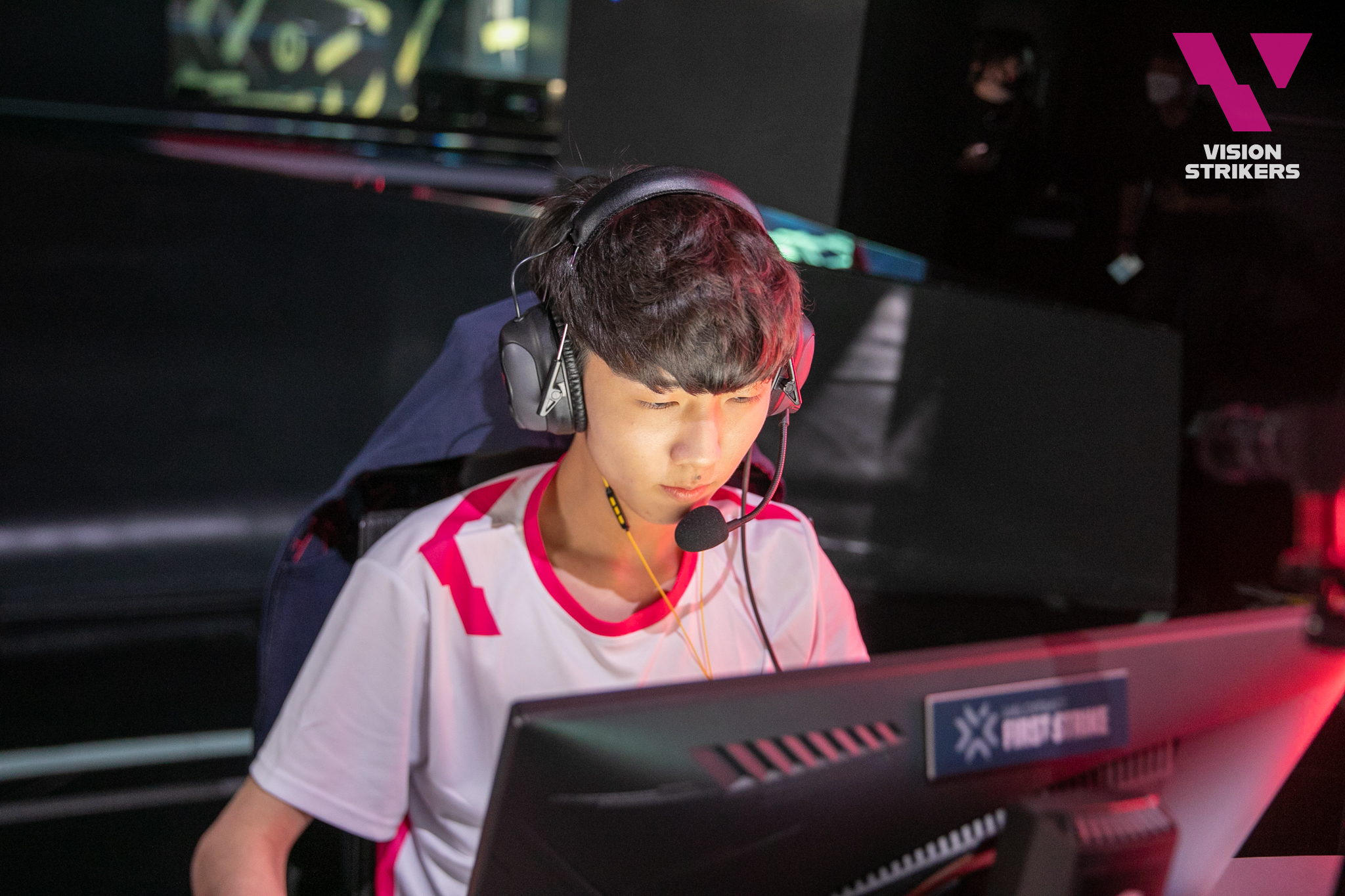 When asked whether there’s a specific team or player he wanted to face, Rb took a different approach. He’s more interested in playstyle matchups.

“Rather than wanting to play with a specific team or a player, I am most interested in playing against every region’s First Strike champions. I think that each championship team has their own unique playstyle and approach to the game. I want to match up against everyone and see which team’s playstyle is the strongest.”

Finally, Rb revealed where he thinks they truly stand internationally. They might not be the very best, but they certainly have a good shot.

“Given our current level of strategies and overall team play, I believe we have a legitimate chance of winning a championship on the international stage.”